It’s that famous. Ed’s red, black and white Frankenstein guitar is a sight that all Rock fans will instantly recognise. It was his primary instrument throughout the making of Van Halen’s history-making first 5 records, and was his main touring guitar for this period, too. In other words, it's easily one of the most famous electric guitars that have ever existed. 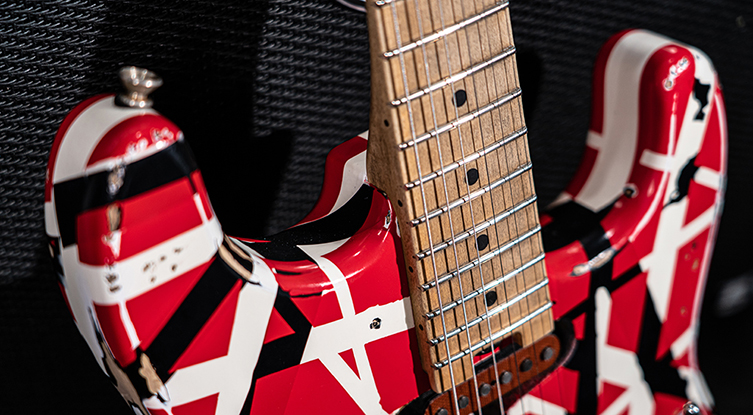 We all know the story, so we’ll keep it brief. A young Ed wanted the tremolo of a Stratocaster but the harder, bigger sound of a Les Paul, all in one instrument. Buying parts from a young Grover Jackson at ‘Boogie Bodies’, Ed then robbed a perfectly nice Gibson ES-335 of its bridge humbucker and used it in his freshly purchased S-type guitar body.

Initially, the guitar was painted black. Ed then applied masking tape to the body in an abstract pattern, and sprayed the entire body white before taking off the tape and leaving the black stripes. Instant masterpiece! This is the guitar everybody sees on the cover of the first Van Halen album. The locking Floyd Rose tremolo and additional red paint came later, as Ed continually made improvements and changes. Yes, the Frankenstein and the Black and White guitar are in fact one and the same!

The guitar went on to make history with Eddie’s playing, as we all know. Since then, there have been a few tributes and replicas made, normally with extremely high price tags attached. Well-heeled Eddie fans have been able to buy a piece of the Eruption dream for themselves. The rest of us could admire from a distance...until now! 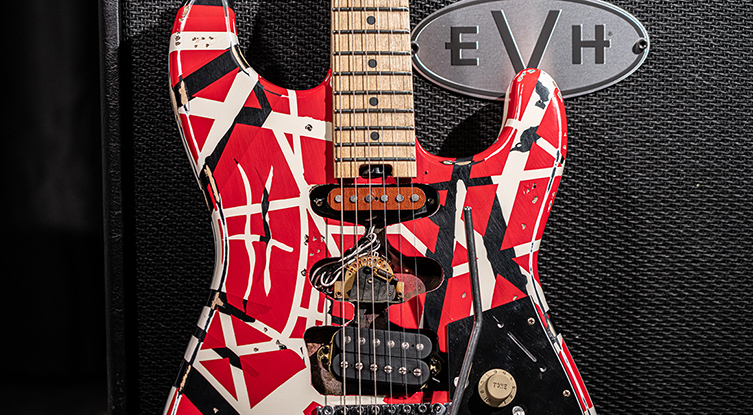 Yes, EVH, Eddie’s guitar and amp brand, have released a new Frankenstein Relic guitar as part of their eminently affordable Striped Series. Earlier Striped Series guitars brought the ubiquitous look to the masses, but this model goes for a much more direct tribute to the Frankenstein guitar itself.

This is a properly researched and detailed relic. Considering that this is a relatively affordable production line guitar and not a custom one-off museum piece, the level of authenticity is staggering! First off, the basswood body has the correct striping, it’s worn away in the right places and the bare wood sections are realistically aged.

We’re also very impressed with the relic work done to the oiled neck and the ‘on display’ electronics. As you may already know, the only functioning pieces of hardware are the bridge pickup, the volume control (it’s a ‘tone’ knob, since that’s what Ed has) and the tremolo. The pickup selector and neck pickup are dummy units, as per the original. The electronics inside the middle pickup cavity have all been aged to retain the look of the guitar, and it’s a job well done. There is a lot of value in this guitar!

So, we mentioned the neck there. Ed is very specific with every element of the design process, but the neck and the pickups are perhaps the most scrutinised. The neck is a ‘modified C shape’, which to us means slim and very comfortable. It’s made from quartersawn Maple, too. This means that the neck blank is sawn from the lumber at an angle, which is more costly but uses the natural grain direction of the wood to provide more strength and stability than normally sawn necks. Graphite reinforcement rods provide even more strength. When you watch videos of Van Halen live in the 80s, you’ll understand why this is a priority for Eddie...

Staying with the neck, the fingerboard has 22 jumbo frets, which sit on a compound radius. In this case, the radius is already relatively flat to begin with at 12”. This gradually flattens out to 16” at the top frets, allowing for all manner of appropriately pyrotechnic left-hand techniques to be successfully executed. What else would you expect from an Eddie Van Halen guitar?

As we’ve noted, a young Edward actively trolled his legion of copycats by installing a dummy pickup and selector switch in order to throw them off the scent, as it were. We must remember how ridiculously influential he was after ‘Eruption’ was released: every Rock guitar player in the planet wanted what Eddie had. The only working pickup on the original Frankenstein was his aforementioned ES-335 PAF pickup, which Ed dipped in wax and soldered into his axe.

EVH have taken that inspiration and developed the Wolfgang pickup. This unit uses the same Alnico II magnet as PAF-style pickups, but slightly ups the ante in the output. What this gives the VH fan is greater harmonic response and upper-mid sizzle. Eddie was never one for supremely distorted, ultra-high output pickups: he knows that great tone is a delicate dance between fingers, pickup, wood and amplifier. A slightly less powerful pickup allows more character from the player to come through, meaning a more lively and interesting sound. 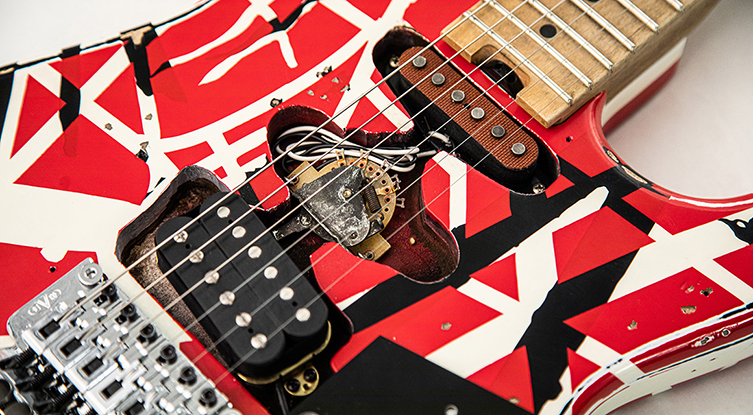 A cool detail is that the pickup is directly mounted to the body of the guitar, eschewing the normal plastic pickup surrounds. This makes more of the tone transfer and carry across to the guitar’s output. Such is the benefit of Eddie’s input. As he says himself:

“I am involved in every phase because I am not endorsing a product – this is my company”.

This type of hands-on expertise means you just know the tremolo unit will hold its tuning and work like a dream. It’s why you know that the tuners have to be Gotoh-built EVH branded units, because that’s what Ed uses himself. The tremolo unit, a licensed Floyd Rose, of course, was originally made with Eddie’s suggestions in the first place, so we can definitely rely on the choices being made here!

His patented D-tuna is included too. You need to set the tremolo so it dives only – not up-bending here – but the ability to instantly go from standard to drop D tuning, without any other strings giving up the ghost, is something well-worth considering for players who like a good riff session! 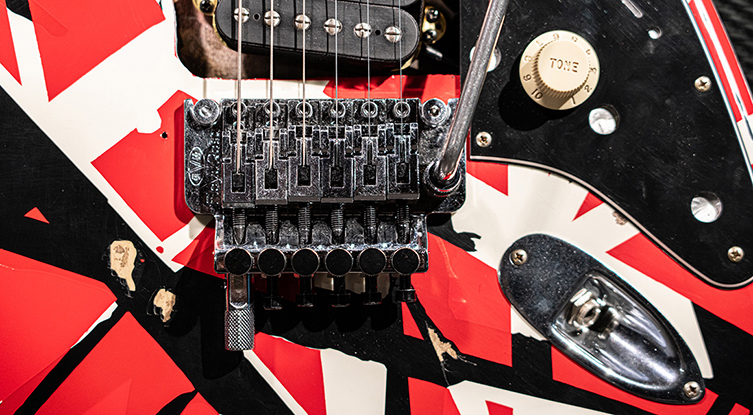 We think EVH have really gone for it this time, and we applaud them for making such a wonderful guitar within the reach of many Van Halen fans. It’s a fantastic recreation of the famous Frankenstein guitar, looked over and signed off by the main man himself.

Everything that’s important is here: the worn in feel, the performance, the sound and the inimitable look. Tiny train-spotter details like the glued-on coin at the bridge and reflectors on the back can easily be added by home-modders looking for a little project work, but in terms of getting a quality guitar out a great price, EVH have gone beyond what we expected.

These guitars will sell, folks. No matter how many we order, we advise getting your pre-orders in fast, because this level of quality at this price is a deal worth snapping up faster than Eddie can play!