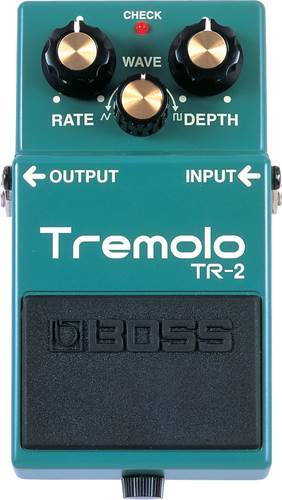 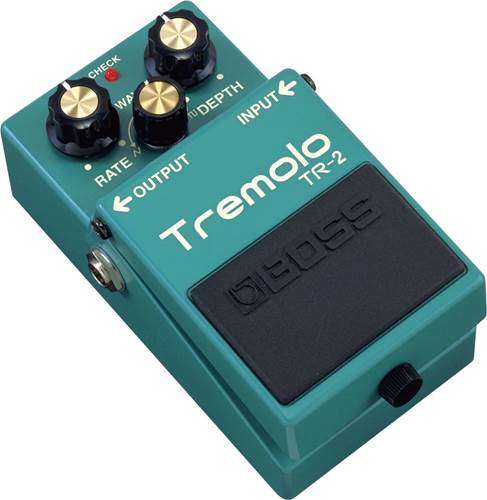 Order now for Delivery on Wednesday

Tremolo has been there right form the beginning at the dawn of pop and rock music. Included as a feature on many valve combo amps of the day like the Vox AC30 and the Fender Princeton (referred to by them as 'vibrato') and it's a sound that's a curious mix of nostalgic and futuristic: bands like Stereolab, Radiohead and Spiritualized have made a great many science fiction-sounding musical moments with deft use of tremolo. Perhaps the most famous use is on the baritone guitar during the intro to the TV show Twin Peaks. That deep stuttering pulse is a sound that resounds through the decades.

BOSS's TR-2 keeps it's aim true and hits the nail straight on the head. It delivers a lovely, warm , retro tremolo sound that can be be altered to sound more square and chopped off for slightly harsher effects. You can do this but dialling it in on the 'Wave' control.

Tremolo is a simple but sublime effect that can sonically transform your guitar parts into something from another realm.

The BOSS TR-2 Tremolo is designed to provide guitarists with classic tremolo effects in an easy-to-use compact pedal. Dedicated "Wave," "Rate," and "Depth" knobs provide a multitude of effect possibilities.

Does exactly what I need. Great piece of kit which is built to last and sounds Great!

boss pedals have always been popular, i used boss pedals in the 80's.

We'll get in touch when the BOSS TR-2 Tremolo Pedal is available.