Rickenbacker: The Other Californian Classic

The other Californian Classic guitar.

That bright, jangling tone. That eccentric, classic styling so unlike the other ‘big two’ brands. Rickenbackers are cultural icons as much as they are top class, USA-made professional musical instruments.

Star of the British Invasion, sound of 80s Indie, and the preeminent choice for players looking for an instrument that takes their style away from histrionics and into more ‘sonic’ realms, the Rickenbacker brand is synonymous with ‘doing things differently’. 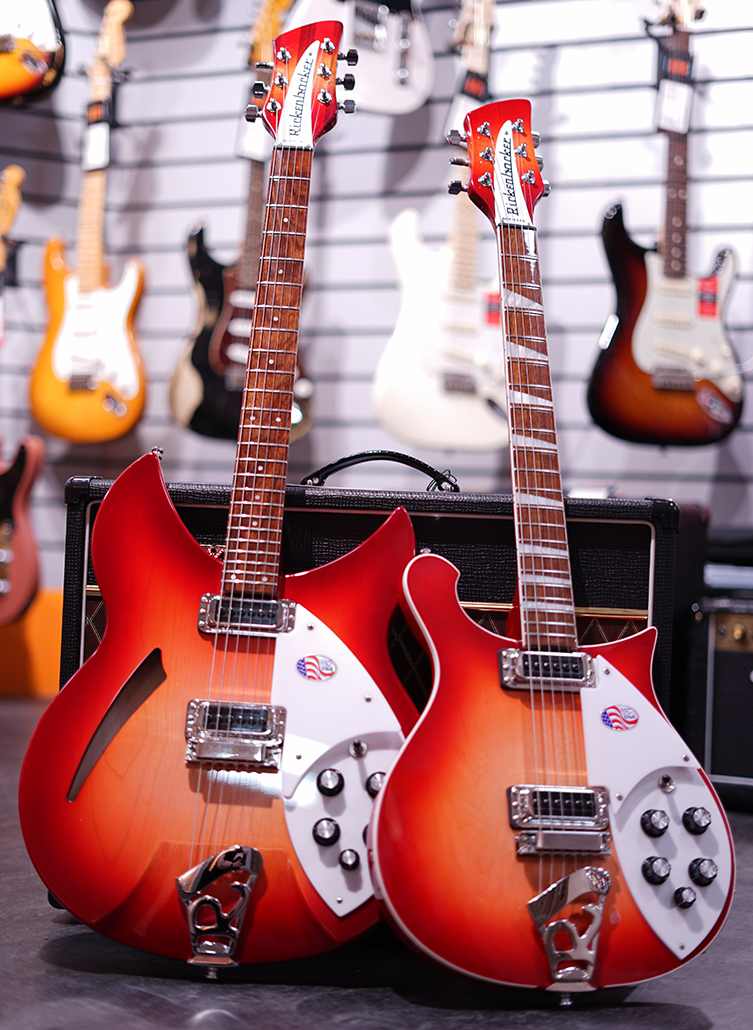 Rickenbacker are high-class guitars, and they are built by hand in Santa Ana, California, the same way the always have. This means that, although we are an official authorised dealer, our deliveries from them are sporadic. Rickenbacker make their guitars right and won’t ship them out till they’re good to go!

Whenever we do get a delivery, therefore, its cause for real excitement. Demand is high, so they don’t tend to hang around in our stores or website for too long! Rickenbackers are highly idiosyncratic instruments, with a famous jangly sound that is effectively impossible to get elsewhere. People who want a Ricky will not settle for anything else! 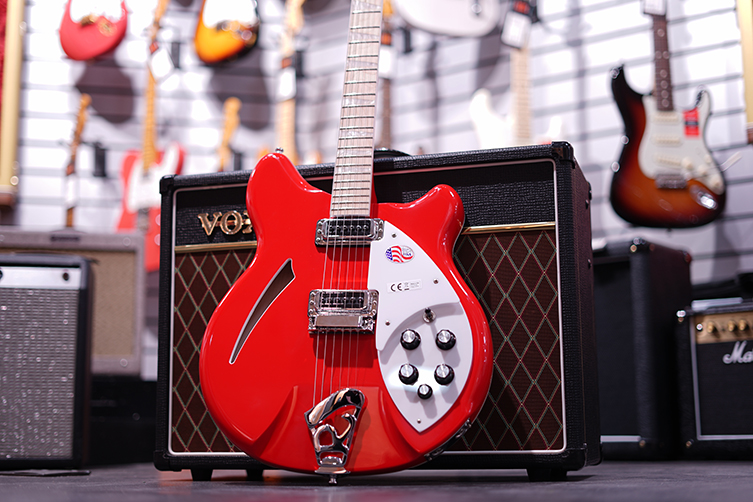 Since the 60s, Rickenbackers have been the go-to for iconic, mould-breaking musicians such as John Lennon, Pete Townsend, Roger McGuinn, Peter Buck, Paul Weller, The Edge, Jeff Buckley and a great many more.

That’s just the electric guitars! Rickenbacker basses are extremely well-regarded too, and their 4003 model is a bass icon used by players like Lemmy, Chris Squire, Cliff Burton, Youth and tons more. As with the guitars, Rickenbacker basses have a distinctive tone unlike any other bass models. This is what makes the brand as a whole special and highly sought after.

Rickenbacker have been around since the early 1930s, and actually invented the world’s first solid body electric guitar, the Frying Pan, in 1935. Rickenbacker specialise din steel, or ‘Hawaiian’ guitars throughout the 40a and 50s, moving into electric guitar building in the mid 50s, when Rock n Roll took off. These initial models were progenitors of the famous Ricky guitars awe know and love, and even back then there were innovations like the ‘neck though body’ construction style that is still adopted in today’s Rickenbacker instruments.

It was the 60s, and the Beatles in particular, who put Rickenbacker on the map.  John Lennon’s Rickenbacker 325 accompanied him to Hamburg and was by his side throughout hundreds of performances, right up to (and beyond) the Beatles’ famous Ed Sullivan Show performances in 1964.

Pete Townsend was perhaps the next most visible fan of Rickenbackers, though his habit of destroying his every night on stage may not have been to the company’s benefit!

From there, Rickenbacker guitars and basses moved into musical history and take their place on the pantheon of Rock guitars. The most famous models are arguable the 330, the 360 and the 4003 bass. These are the models we’ll have a quick look at today. 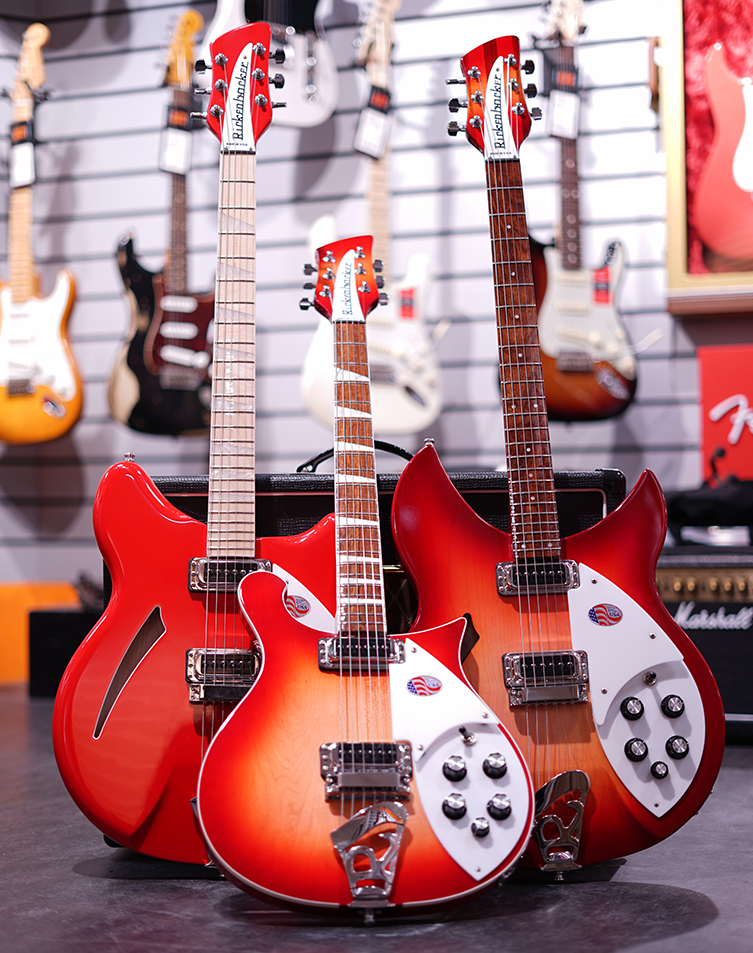 The Ricky 330 is, for many, the definitive example of this company’s style. Shown here in ‘Fireglo’ (a bright and rich Cherry Sunburst by any other name), the 330 is a semi hollow guitar with large ‘wings’ and a characteristic ‘slash’ soundhole all featured on the Maple body. The neck has 24 frets with great access afforded by those deep cutaways in the body shape. The scale length is 24.75” and, on this particular example, there are dot inlays.

The Rickenbacker 330 has a beautiful, chiming sound that makes arpeggios sing out beautifully. The pickups here are described by Rickenbacker as ‘Hi gain’ but we’d beg to differ. This is a classic sound through and through. Maybe what Rickenbacker mean is that the pickups handle gig volume well and won’t lapse into feedback, despite the semi-hollow nature of the build.

The Rickenbacker 360 model swaps out some of the previous model’s angles for a more curvaceous body. For REM fans, this is the model Peter Buck plays, though his is ‘Jetglo’, which is Rickenbacker’s amazingly fancy name for ‘Black’.

The 360 shares the same 24 frets as the 330, but this time includes those super-cool Sharkfin inlays for ultimate Ricky style! The 360 has binding around the body and fingerboard, bringing a slightly more upmarket vibe to proceedings. Most significantly, you’ll have access to the inimitable ‘Rick-o-sound’ with the 360. This is basically true stereo outputs, which you’ll need two amps in order to achieve as it’s literally a pair of ¼” jack outputs! If your band only has a single guitarist, this could be a great way to enjoy a large, expansive spread of sound. The opportunity to experiment when recording is also great.

We love the Rickenbacker 360: it’s so charismatic and stylish. No, we wouldn’t attempt any John Petrucci sweeps on one, buit there are a raft of other guitars to ably handle that: we want the Rickenbackers to slightly ‘play us’, as it were, and find some exciting middle-ground.

We have great examples of the Ricky 360 in Fireglo, as you’ve seen, and also the more unusual colour of Pillar Box Red! This variation has a Maple fingerboard instead of the customary Rosewood. These are limited Edition, so don’t be someone who holds back only to kick yourself later: get in now! 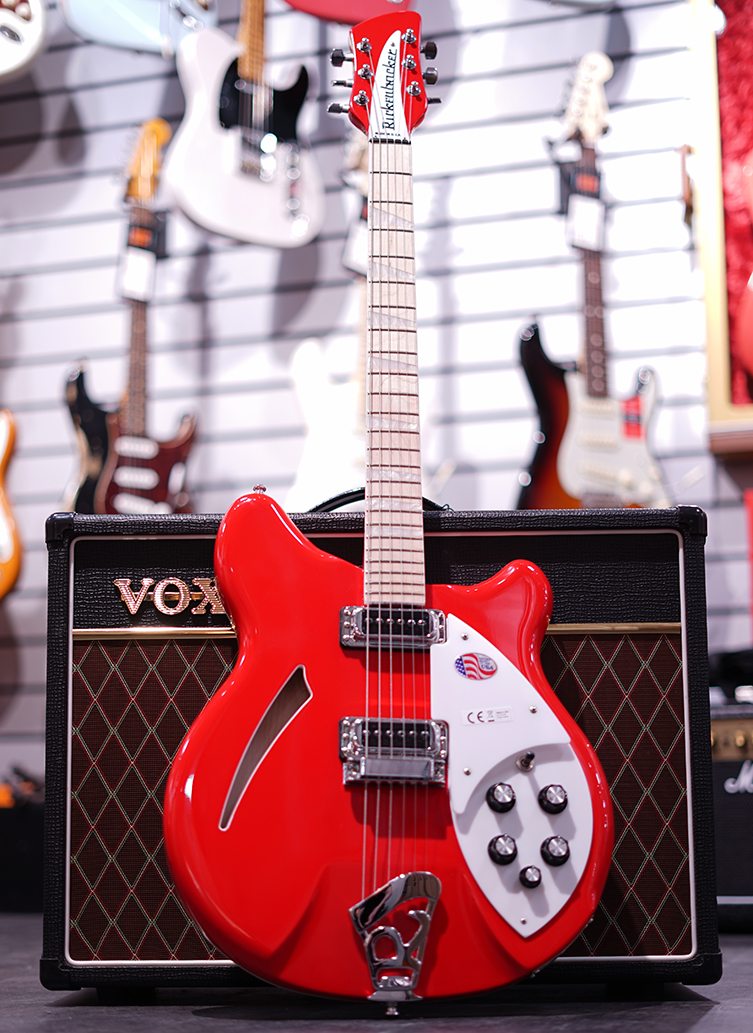 This super-cool Rickenbacker is a solid body 12 string model. Those extra strings really deliver that gorgeous, shimmering jangle so beloved of tasteful indie rock players. This neck-through model has a ‘charactered Maple’ cutaway body with some excellent details that include a gold anodized pickguard and chequered black and white binding. This time out, vintage reissue pickups have been used to impart that sweet, nuanced jangle. It’s mono, with 21 frets and a beautiful look. The Rickenbacker 660/12 is a wise and worthy addition to your collection, because it’s likely that you own nothing at the moment that sounds and feels quite like it. 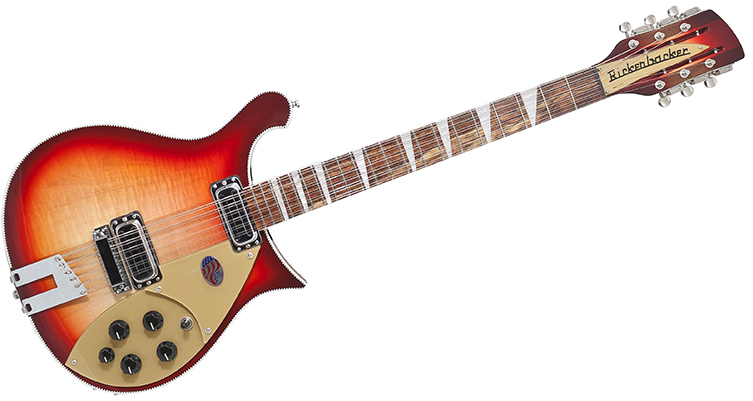 No self-respecting article on Rickenbacker instruments can be complete without a nod to the superlative 4003 bass! Indeed not, and rightly so: it offers a powerful and quite distinct playing experience, with its mighty size and shape. Truly, plugging one of these in definitely changes your playing! We love the attitude of the Rickenbacker 4003: it’s strident, dominant and full of aggressive ‘Rock’ personality.

The Rickenbacker 4003 utilises two single coil pickups, with the bridge unit hiding underneath a very cool cover/finger-rest. The 4003 is made from solid Maple and has a scale length of 33 ¼”, making it actually a tiny bit shorter than ‘standard’. Like the 360 guitars, this bass has the option of working in either mono or stereo, depending on how much sonic terror you feel like inflicting on your audience!

Also, like the 360, there is a limited-edition Pillar Box Red model available in tiny quantities, whilst stocks last! 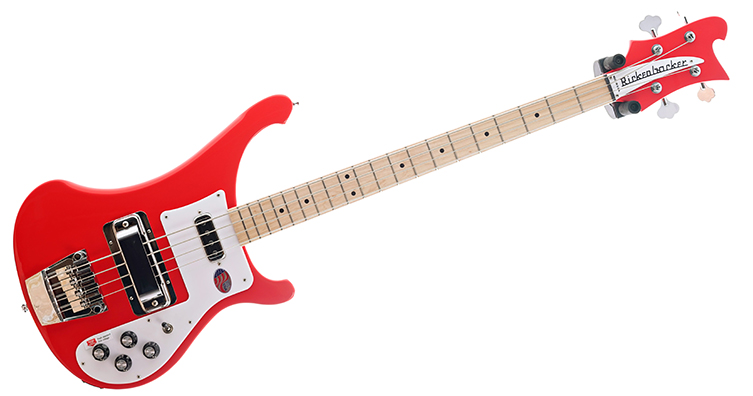 Rickenbacker have solidly stuck to their guns for almost 90 years, making guitars and basses in their own style, beholden to no one else. We love that. When they make such musical, practical and beautiful guitars like these, it’s fair proof that they’ve been on the right track all along!

Rickenbacker is very definitely a ‘type’: just as Fender have a type, Gibson, Gretsch have types etc, so do Rickenbacker. If you don’t have an example of this type of guitar in your arsenal, let us tell you something: you are missing out! Remedy that as soon as you can, whilst we have these beauties in stock!